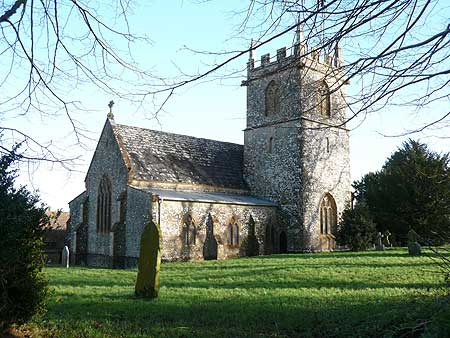 The church and adjacent manor house mark the centre of the village which is hidden in a fold of the chalk upland.The exact origins of the church are uncertain, but it is safe to say that there has been a parish church on the same site for over 700 years. The oldest part is the tower, which is square and unbuttressed and is built on the south side of the church rather than on the central axis. Its first two storeys date from 1326 and housed a chantry chapel in memory of the son of the then lady of the Manor. The base, now the vestry, contained an altar which permitted a view of the main altar by means of a hagioscope. The tower's belfry was added during the 1858 reconstruction, and houses a peal of five bells.The church was restored mid C19th, in the decorated style of the C14th. The large font was installed in 1844, a gift to the then rector from his brother. Augustus Welby Pugin designed the rebuilding of the Chancel work completed in 1847. The piscine (basin) and sedililia (priest's seat) are ancient and were incorporated into the rebuilt chancel. Pugin also designed the east window of the chancel, which was made by John Hardman of Birmingham, at a cost of £70 (£7000 today). Pugin's fee was £20 (£2000 today)The nave was rebuilt and extended by John Hicks, a local architect from Dorchester, in 1858-9 in a similar style to the chancel giving a consistent appearance to the church. One of Hicks employees at this time was an 18 yr-old trainee architect, Thomas Hardy.Outside, there are remains of what was once a large perpendicular cross of Ham Hill stone on a plinth on which are sculpted the murder of Thomas a Becket and other scenes relating to him. Underneath is the following inscription:'Fili Dei misereri mei et sic Porter in nomine thu Amen Obit A.D.MDXVI(Oh Son of God have mercy upon me and thus says Porter in thy name. Amen)Porter died in 1516. The platform to the side of the Cross is dated 1606. It has suffered the ravages of our climate and so is difficult to be sure of its history.According to Sir Frederick Treves in his superb 'Highways and Byeways in Dorset' (1906), “Rampisham is one of the most beautiful villages in Dorset. It stands in a valley of trees through which runs a stream. It is a place of old thatched cottages ...” He notes that Rampisham's most famous son was a distinguished physician called Francis Glisson, who was born in 1597. He studied at Cambridge where he eventually rose to become Professor of Physic and after moving to London, a founder member of the Royal Society. He wrote many learned papers, amongst which a series on rickets (partly observed in Dorset) and most famously of all, his description of the anatomy of the liver and in particular the fibrous sheath, known to this day as Glisson's Capsule. He died in October 1677. The Dorset Historic Churches Trust gratefully acknowledges the contribution to these notes made by James Read and the generous hospitality of Michael Nisbet during various visits to the church. The Trust gratefully acknowledges images and text by Robin Adeney ©