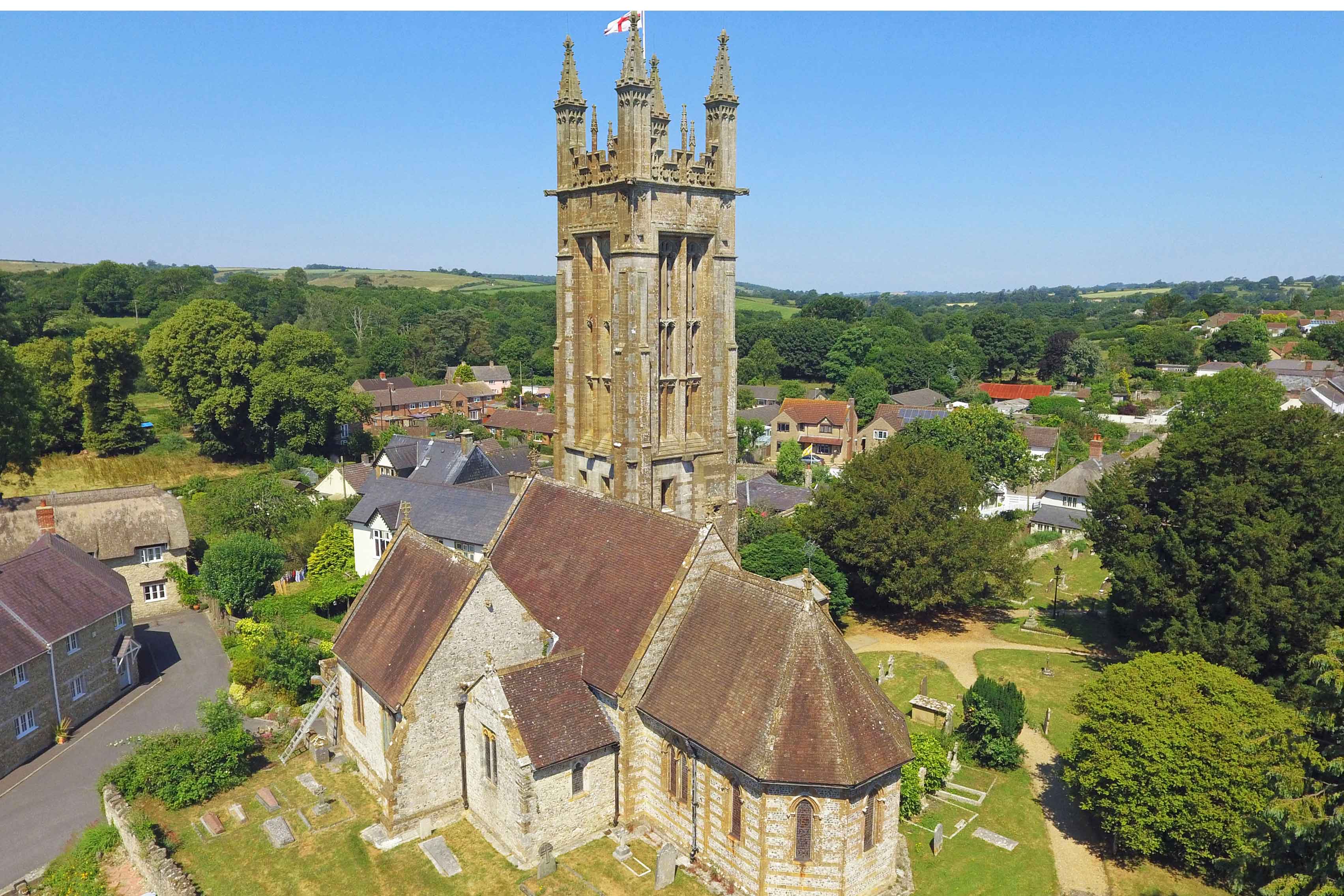 The village of Cattistock has a history reputedly reaching back before the reign of the King Athelstan (924-39), who was the first recorded king of England and who gave the settlement to Milton Abbey.  Now it is a peaceful and quintessentially English village with delightfully rural architecture clustered around the triangular centre.  However,  dominating this and the scene for miles around stands George Gilbert Scott jnr's supremely elegant church tower.

The monks of Milton Abbey built a church here in C12, although nothing is now left of that structure.  The present building is essentially Victorian, although the north transept was rebuilt in 1630 by the Rev. John Mayo, with the exception of the Arts and Crafts glazing in the east window, depicting St Dorothy, which is from 1923.  The church is unique in Dorset ecclesiastical design, being the result of a very talented son adding to his father's work.  The nave, south aisle and chancel were entirely rebuilt in 1857 by the eminent London architect, Sir George Gilbert Scott (1811-78).  When he arrived there was a gallery that extended for a third of the length of the nave and is said to have given the area a "forlorn appearance", so he removed it and installed a new west window, known as the Jesse window.  The Rev. Henry Hughes paid for all Scott's work.  The south aisle is also by Scott snr. and contains some very important stained glass windows. One window, erected in 1882 in memory of Mrs Digby, is by William Morris and Sir Edward Burne Jones and another is by Hardiman.  The south transept Lady chapel is lined with C17 wood paneling and was endowed by the Strodes of Chantmarle. The baptistry is perhaps the most memorable area, it is dominated by the truly magnificent 20 ft high font cover, designed by Scott junior's assistant and successor, Temple Moore, and installed in 1901-6.  The walls are lavishly decorated with a 1901 mural of St George and the Dragon by W O & C Powell.

The organ of 1869 is by F W Walker of London.  The octagonal pulpit, adorned by figures of the Apostles in Caen stone, is constructed from Ham Hill stone supported on four columns of Serpentine marble.  The oak lectern of 1922 features a Pelican pecking her breast, a symbol of Christ sacrificing himself for man.

Outside, the building is dominated by Scott junior's superb tower of 1872, which was paid for by the Rector, Rev Keith Henry Barnes. It was his first major church brief and the structure rises to 100 ft. It was designed to accommodate a baptistry in the base with a ringing chamber above, a clock chamber above that and a carillon chamber at the top.  It proved to be stunningly expensive. From an original estimate of £2,700, it rose in cost to £6,046 when it was completed in 1876.  The clock was certainly designed to be seen from a great distance because it had a face which was almost the entire width of the tower and has been described as being not much smaller than Big Ben!  However the 35 bell carillon, which was regularly played to the great delight of people who came from far and wide was lost when the tower was consumed by a fire in 1940.  The bells melted and the whole structure had to be pulled down.  It was rebuilt in 1950 using Scott junior's original design by the Arts and Craft architect J.S. Brockerley, although, sadly, there was not enough insurance money to replace the carillon. This is one of the finest examples of a C19 church in Dorset and handsomely repays a visit.