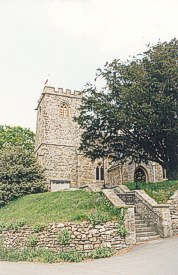 The church of St. Nicholas stands next to a wonderful mellow 16c manor House.

This is a very old Christian site because the first known record of a building is from 1216 during the reign of Henry III (1207-72), who is regarded as one of the most cultured kings ever to have occupied the throne.  There may even have been an earlier church suggested by some 13c work found the 14c chancel.

The present building consists of a 15c south porch, a nave of uncertain vintage, a 15c ten foot square west tower and a north aisle with a vestry at the western end, added during a major Victorian restoration of 1871 by Henry Hall.  The south chapel is also 15c and is notable for its most attractive oak ceiling with moulded beams and square panels.

The round bowled font with continuous fluting is 13c.  The elaborate cover is later.