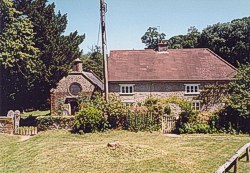 St. James  is one of those Dorset churches which is awkward to find, but well worth the effort.  This one is buried away at the end of a very long drive and adjacent to a private house.

At just 38 x 15 feet it is very small and Sir Nikolaus Pevsner thought it dated partly early 16c and  partly early 18c.  However, by far the most striking feature is the huge circular window that dominates the east wall.  This is a veritable regiment of angels shown from a variety of angles and records a death in 1893, so the glass is Victorian although the wood surrounding the lower half is clearly 18c.

Another smaller circular window adorns the rear of the building below the bellcote.  Interestingly and unusually,  the font has been placed in front the communion rails and is clearly 18c.  There is no formal pulpit, but there is a small three decker clergy pew.  The organ is generous for such a small building.In all a tranquil and delightful place.