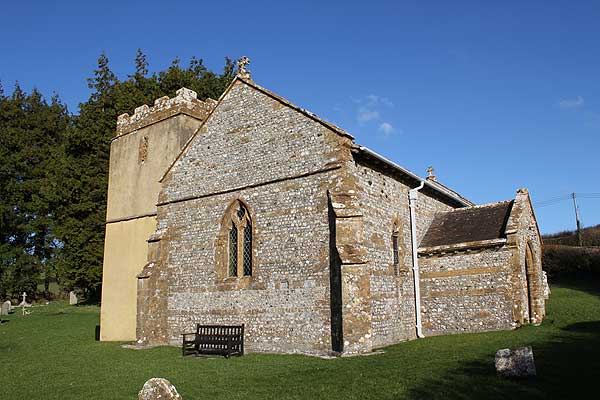 From St.QuintinThis must be almost unique in Dorset because the church, which is surrounded by a hedge, is in the corner of a field with no road access to it. Like so many English villages, the origins of Frome St Quintin are lost in the mists of time. Hutchins records "on a hill in the parish, the ground marks an old encampment".Certainly, the village and the surrounding land formed part of a royal estate in Norman times, being held by Queen Mathilda, wife of William the Conqueror. In the Doomsday Book it appears as Litelfrome but by the end of the twelfth century it was held by Herbert de St. Quintin, one of King Richard the Lionheart's powerful barons, from whom its present name derives. The mediaeval patrons were the Abbots of Tewksbury and the list of incumbents begins in 1132. Tradition has it that the original village surrounded this delightful little building, but was depopulated as a result of the Black Death, leaving the church isolated..The doorway which leads to the vestry beneath the tower is partly twelfth century, whilst the nave and chancel are C13. The surprisingly short tower was added in the fourteenth century and the chancel arch rebuilt about 1400. The south main entrance porch is C15. The various windows reflect these periods. The octagonal font with a cylindrical stem and chamfered base is C12. The church was restored in 1881, with the result that many of its features are late Victorian. Note the splendid oil lamps. The mediaeval altar is of Purbeck marble, repolished and with five more recent crosses, whilst the window above it, depicting the Nativity , is Victorian, as is the carving of the Last Supper.  This enchanting little church has a stunning barrel roof and an aisle that dramatically rises towards the chancel and hugely rewards a visit. The Dorset Historic Churches Trust wishes gratefully to record its sincere thanks to Linda Williams for the assistance received in the preparation of these notes.The Trust gratefully acknowledges images and text by Robin Adeney ©